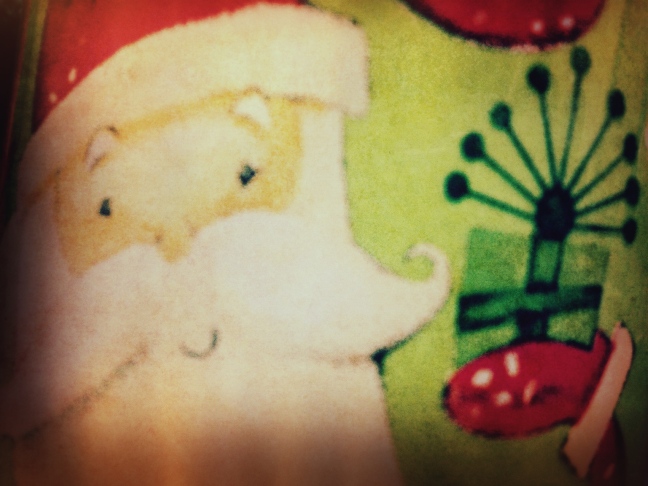 Now that the holidays are over and credit card bills have replaced Christmas cards in our mailboxes I thought it was a good time to write about “The” Christmas Spirit: Santa Claus.  Actually, it may seem a strange time to write about Christmas but let’s just consider this a post-game wrap-up on the holiday. I’ll be sure to repost this next year after Thanksgiving with some updates.

Our kids are now nine and eleven so this past Christmas the questions about Santa were more frequent and more pointed. Is there really a Santa Claus? Are you and Mommy Santa? Some of the kids at school have older siblings and those kids tend to me the more “mature” and knowing in the ways of the world. Our kids have heard from various sources that Santa is fake and parents are really Santa. Same goes for the Easter Bunny. Heavy stuff for our not-so-little ones.

My wife feels guilty about “lying” about Santa and almost cracked this past December. We discussed it and I thought more about it. I even read some of The Autobiography of Santa, which I highly recommend to help get you in the Christmas Spirit. Is Santa fake? Are WE really Santa?

Our decided upon answer was this: If you believe in him, he will come. Sound familiar? No, not Field of Dreams. Who does Santa share Christmas with? Jesus. Does Jesus really exist? Is he really the Son of God? If we believe in Him, He will come.

Now, this is not a religious treatise. Did George Washington really exist? Did he have wooden teeth and chop down a cherry tree? Did we really have a nice, big sit down dinner with the Native Americans on Thanksgiving? Reality? Myth? These are concepts that help instill larger ideas of how to live our lives. Our heritage. Our histories.

Three kings brought gifts for the baby Jesus. Santa Claus could have been one of those kings and together with Jesus he shares the most beloved holiday of children.  May not be true but it is a nice idea.  Just like history is written by the winners of wars and even writers of non-fiction like everything tied up in neat packages with happy endings. Santa bestows the gifts and the baby Jesus, for once, in what will be a very challenging life, can relax, lie down in the manger and receive the gift of our love and thanks. The Spirit of Christmas is giving.

As a parent, Christmas is one of the most joyous and stressful times of year. With young children it is easier but as kids age the spy-craft becomes more challenging. On-line or mall shopping. Hiding Amazon, UPS and FedEx packages before the kids return home on the bus. Hiding the gifts in the house and wrapping under cover of darkness behind locked doors. Staying up late to deliver the presents. Lots of work.

When I was in about the fourth or fifth grade we were living in a modest home and I found the “Santa” gifts under my parents bed. Not the best hiding place, I know, but there was no where else they could really hide them. I didn’t say anything but after Christmas my parents asked about Santa and I said that I knew it was them.  It was a bit of a letdown but then I thought about all the Santa gifts over the years and all the work it took to buy, hide, wrap and deliver those presents in a small house to my brother and I. It was then that I understood the true meaning of Christmas. Selfless giving. And I looked forward to being a Dad and have my turn of being Santa.

On birthdays it is very important to know who gave you what. Sometimes for sending thank you cards and sometimes for keeping score on who spent the most, cares the most, got the best gift, etc. But at Christmastime, parents work hard at their jobs, save, shop, buy, hide, wrap and deliver, knowing full well that they are not going to get any credit for their generosity. We even have to eat all the cookies, drink the milk and eat the carrots left for the reindeer. Eat the carrot first, then the cookies, then the milk. Trust me.

My son, who is going on 12 and is on the cusp of the Santa revelation, said in a rare parent/child confrontation after Christmas that we, the parents, didn’t get him much for Christmas.  Santa brought most of it. I almost broke cover but then realized with a smile that he still believed. Even if he was being a spoiled brat at the moment.  Santa was still alive in his heart. Maybe just for one more year but at least the spark was there. Again, though, no credit.

My wife and I discussed the topic further and realized we had to decide on what to say when they did, really, discover that there was no Santa Claus. I thought about this some more and decided that, indeed, there is a Santa Claus. Somewhere.  Just like there is a Jesus and was a George Washington and at some point in history, somewhere near our home in Massachusetts, Native Americans did sit down with Pilgrims and ate a nice meal together. We just don’t know all the details. Will never know. But we believe. So these ideas are real because we hold them in our minds as concepts and feel them in our hearts and souls as who we are and where we came from. Whether we call it religion or mythology or history it still takes some imagination and suspension of disbelief to reap the benefits of celebrating the past: well-being, happiness, knowledge of self and community. Thankfulness.

This is all pretty abstract and I didn’t even learn it until this past Christmas. So, for the kids the company line is this: There is a Santa, somewhere, everywhere, but he is a spirit. A feeling of giving. If you believe in him, he will come. Of course, there is no way anyone could deliver presents to all the kids all over the world on Christmas Eve. So, parents who can help out with the presents and the delivery of those presents, do so. Santa takes care of the rest. Anyone can be Santa. And everyone should be.

After our kids reach this milestone in their childhoods I will miss all the subterfuge that goes with helping out Santa at Christmas. But I have a feeling that there will always be a few presents under the tree from Santa with the bad handwriting and the different (always different, has to be different) wrapping paper. And, perhaps our kids will get into the act and give Santa a hand as well because I’m not so sure about elves.