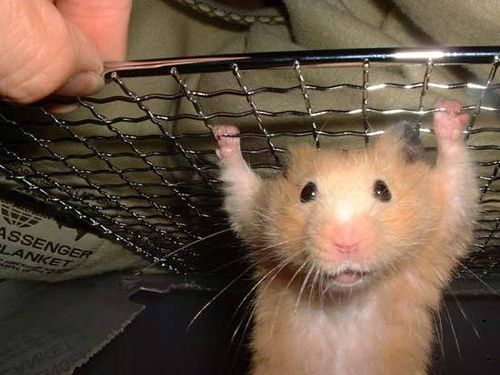 Ok.  I apologize for the delay. These procedurals are tedious to write. I hope it is not as tedious to read. But if you read to the end, you will be rewarded with the quick, easy and painless (to the hamster) way to catch your wayward pet.

The first trap consisted of a cardboard box with a hole cut in the side about 4 inches high. A curvy section of hamster tubing allows the hamster to climb to a trapdoor inside the box. When the hamster steps on the trapdoor it falls into the box. Captured.

We tested this method out with our other hamster, Salty. Salty is a plump, Russian Dwarf with red eyes but a roly-poly sweetheart nonetheless.

Salty got to the top of the tubing, sensed that something was wrong and, comically, tried to back up inside the tube. After a few moments of scratching and scrambling, Salty resigned himself to falling into the box and was rewarded with a peanut butter smeared cashew.

We set this trap at Nana’s house that night and found the next morning that the bait was missing but no LooLoo. We determined that LooLoo may be a bit more agile than Salty as LooLoo weighs-in at about one third the size and a is good climber to boot.

Next, we tried a stake-out approach. My daughter and I slept over on the couches and waited for LooLoo to walk into an open cage that was loaded with peanut butter and nuts. Naive, I know, but Nana had seen LooLoo scurry across the floor while she was watching the Oscars. She seemed right at home and brazen enough to roam so we figured she would just walk right into the cage and we would shut the door behind her.

Only one brief sighting at 3:20am when I shined my flashlight under the stove and saw LooLoo steal away into the aforementioned hole in the wall. Strike two.

My wife jumped into the fray and made a trip to Lowe’s and returned with a humane, Havahart, squirrel trap which consisted of a swinging door triggered by a pressure plate where the bait sits. When a rodent steps on the plate, again baited with Jiff peanut butter (we didn’t want to waste our good Skippy Natural Peanut Butter), the door would slam shut.

Of course, this trap was intended for larger rodents, like squirrels and rats, but LooLoo, weighing in at about 4 or 5 ounces, did enter the trap. The door did not slam shut but my wife was watching and she slammed shut the door and immediately called me on her iPhone. “We got her!”, she said and then “Oh, no, she’s getting away!”.

You see, the bars of the cage form half inch squares and it appears that space is more than enough for LooLoo to squeeze through. My son made a diving attempt at nabbing the Houdini hamster but she eluded him and retreated back to the safety of the shadows under the fridge.

Meanwhile, I had been working on another hamster cage trap that consisted of a cardboard ramp leading to the top of a cage that has an opening on top. I cut out a rectangle of wax paper and laid it out over the opening like a trapdoor. My vision was of those tiger traps in movies where they cover the opening of a pit with bamboo and palm fronds and hang a slab of meat over the trap platform. I gently placed a peanut butter covered almond on the wax paper and left my mother-in-law’s for the night. We both agreed this looked like it would work but I could tell she was rolling her eyes as I left and was envisioning making her own trip to Lowe’s for a real, non-humane mouse trap.

The next morning, I called Nana and she said the trap worked but the hamster wasn’t in it. LooLoo did go for the nut and knocked it into the cage but did not fall in. Since I do not know when to quit, I tried this trap again that night by building cardboard walls around the opening on top of the cage so LooLoo couldn’t go around the sides for the nut and must step on the wax paper. Didn’t work.

The next day, now going on two weeks, I went to Lowe’s to return the over-kill, but humane, squirrel trap and visit the anti-vermin section of the store once more. And there, two shelves above the Havahart rodent trap is the (DUN DUN) Tomcat Live Catch Mouse Trap, which appears to be a very simple, humane cantilevered type trap that I was envisioning inventing if I had half a brain left.

You put bait in one end, the hamster or mouse enters the other end and when they reach the bait the trap tips slightly, closing the door and trapping them – humanely, except for the solitary confinement aspect.

Now, with this type of trap, placement is everything.  So, we went to the source, the place where we originally saw all the food and the droppings – under the stove. I place the trap, baited with; you guessed it: peanut butter, in the sliding drawer under the stove and leave for the night.

LooLoo had eluded us for two weeks plus two days. The next morning we get the call, SUCCESS!  I carefully pick-up LooLoo and place her into one of the various hamster cage contraptions we had rigged around Nana’s house and return home to welcoming cheers.

I realize this has been a long entry, with many dubious uses of punctuation, and I promise my posts won’t be this long. I just wanted to work through this process to show how determined and stubborn our family can be and how we, usually, work together through a problem and learn along the way. I think most families are like this.

Most of the time, the best, easiest or most efficient solution is staring us in the face but we opt to muddle through and struggle through our own crazy ideas until we find what works sitting on a shelf at Lowe’s. It just takes some time and lot’s of patience.

All the traps used in this story were going to be part of my daughter’s science project: To Catch a Hamster but neither hamster would go into the Tomcat Live Catch Mouse Trap while we were videotaping. Salty wouldn’t fit and LooLoo had learned her lesson.

Both hamsters are alive and well and living in Hamsterdam in our livingroom.